Thunder Birds and Water Monsters: Review of Fossil Legends of the First Americans by Adrienne Mayor

In the last six months, my goal to ‘Conquer the Backlist’ has nosedived into the ground. I’ve been creeping along in Adrienne Mayor’s Fossil Legends of the First Americans, and finally had some time where I was unable to work, unable to connect to the internet, and unable to write. Essentially, I had to sit around on my butt and read a goddamn book.

It was so nice. I generally don’t read a lot of nonfiction, but as this served as research purposes for the novel currently being scribbled in my spare, spare time, I wanted to dedicate some brain power to it. My future world-building was a stake. Mayor’s research had me reconnecting with the land instead, imagining a United States as an ancient boneyard covered in the remains of mastodons and dinosaurs. Mayor hypothesized that fossil legends are important to the historical understanding and enrichment of paleontological, anthropological, and archaeological studies—that many times large fossil finds correlate with specific oral legends. By using fossil mythology, not only can scientific evidence be gathered or pieced together, but those data points are pretty darn accurate. 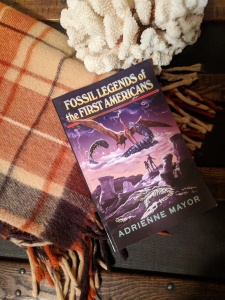 Covering North America (but emphasizing the United States) in chunks, Mayor split up the book according to region and associated tribes, which added a unique flavor. Ideas and common threads pieced different tribal stories together—some distilled across space, others changed—showing a zoological assimilation of new data that became incorporated into legends that continued to evolve over time. Some of my favorites were fossil legends that came directly from places I’d been and considered part of my home—the place I’d gotten engaged was seeped in legend, the land my grandparents came from used to be a battleground between two giant monsters, the skeletons I’d seen in museums came from the earth of my state. It gave me new appreciation for those places and the only thing I wanted was more. More legends, more oral stories, which unfortunately had been lost.

And yet, strangely enough, some of those words had been incorporated into the scientific names of the prehistoric animals when they were ‘officially discovered.’ The old word for thunder crept into the Brontosaurus, potentially a thunder-creature because of the sound that might’ve come from its swinging tail. Wakan denotes a supernatural or strange ambiance to the unknown. In some languages, items are identified as being animate or inanimate—rocks and earth are most definitely thrumming with life. Additionally, learning how African-American arrival had influenced southern legends, creating elephant-like creatures or long-nosed monsters, was a facet of the ‘Notes’ section that I wouldn’t have read unless I looked. Mayor, I feel, had more evidence that could populate a whole other book on the topic–the Appendix and Notes sections could very well serve as more chapters.

To say the least, I’m curious to learn more about the history of America’s Bone Wars. Enough so that other nonfiction books will flavor my to-be-read pile.