The Fall of 2018 had me knee deep in North American paleontology research, not only to learn more about North American history, but as an addition to research I’m working on for the first draft of a new novel. I was born and raised in Montana, so dinosaur bones have surrounded me on all sides, but I hadn’t taken the time to research the mythological backgrounds of theses beasts, and the intricacies of the bone war between O.C. Marsh and Edward Cope in great detail. After all, these men canvassed the American West, including my home, searching to understand the bones of these giant creatures buried in the earth.

I picked up The Gilded Dinosaur by Mark Jaffe as a donation book sale for $2.00 back in November. And with a tagline of “The Fossil War Between E.D. Cope and O.C. Marsh and the Rise of American Science,” how could I go wrong? 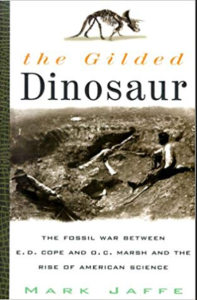 I’m not a huge non-fiction reader—most non-fiction that comes my way is read for a purpose and then has to be intermixed with fiction. I believe this was my third non-fiction in a row (mental high-five!), but while this book was full of small interesting stories that entwined with the full narrative, at times everything felt so dry. I found myself shaking my head at times, thinking these historical figures were egotistical dummies who fought more than they accomplished. At one point, Cope applied for job after job, squandering his money, with nothing to show for it except a crumbling marriage and a huge production of scientific papers. Marsh hoarded his findings, keeping boxes of fossils unopened because of his jealousy of what others might uncover. Like, the point of unearthing them only to let them linger just seemed so…dumb. Better yet; pointless. What came through felt like a lot of life-choices that haunt men and women throughout their days: to pursue career and fame but spend your days lonely? Or to create a family only to continually seek career and fame, to be awarded near the end of your life?

I digress. The novel was well-written and well-researched, adding in tidbits of historical notes I was unfamiliar with. While it did get dreary hearing how Congressional funding was thwarted over and over from one department to another, it did reveal facts about the creation and overall purpose for the US Geological Survey, which was cool. Also, I didn’t know that so many people donated their brains to science, and that Walt Whitmans’ met a tragic end splattered on the floor by a laboratory assistant. My opinion? If you’re able to digest dryer bits of narrative entwined with sparkling gems of somewhat-fictionalized retellings, this book is for you. Jaffe definitely did justice to the story, but for me, my overall impression was that the keywords for the history is much more appealing than when you dig into the story itself. Overall, Marsh was a miser who didn’t pay his people on time and held grudges. Cope didn’t have enough self-preservation to keep his trap shut and thus offended a bunch of people who could’ve made his life easier in the long run. Yet both left a legacy of jumpstarting paleontology and categorizing dinosaurs. If I could have had more, I’d have liked to see a deeper exploration into the relationship between Red Cloud and Marsh, but perhaps there wasn’t more to the relationship than what had been disclosed in the novel.

And Julia Cope! Throughout the novel, I watched her grow up from an inquisitive young girl to one well-educated in science. The affection between father and daughter felt immense, yet I wondered how many times Cope saw his daughter throughout his life. He always seemed to be writing her letters and far away. She married at age twenty-eight, but I wondered what happened to her elsewhere; what she thought of getting a less than palatable job to support her family; if she pursued her scientific endeavors; but I do understand that perhaps the story of Julia Cope might be more interesting to my imagination as to what actually happened to Julia Cope.

Here’s an example though, of the style and type of gem that litter the novel that kept me going:

Cope stopped at the Little Eagle settlement, where he enjoyed the hospitality of a missionary, Miss Collins, who ran a prayer meeting and YMCA for the tribes. Her house had ‘mosquito bars,’ or screens which Cope said ‘made life endurable.’ Cope found Mis Collins and her assistant Miss Pratt both ‘good New England types,’ and it was from them that he learned the Sioux legend of the big bones.

Once, evil, giant monsters roamed the land. Then the Great Spirit sent powerful shafts of lighting to destroy the beats. Their bones were left scattered across the prairies and badlands. The Sioux would not touch the bones for fear that a similar fate would befall them. But a boy at the settlement knew just where a great many of these big bones were to be found and the next day, he led Cope across the prairie to the spot.

Sure enough, the boy brought Cope to a rich boneyard. It was, Cope wrote, ‘covered with fragments of dinosaurs, small and large…all around on banks and flats, bones everywhere. This was our destination.’ The greatest prize was a nearly compete skull of a dinosaur similar to a Hadrosaurus.

They had reached this boneyard as evening and its summer thunderstorms approached. So, after making camp and supper, Cope said he lay down to ‘dream of Dinosaurs except when the thunder and mosquitos work me.’ He crawled out of his nest of canvass and crates to see storms sweeping the plains on three sides with ‘lighting…in forked streams’ playing across the sky and descending to Earth in ‘blinding bolts.’ Black skies, low pale cliffs, alkali pools, and the bone mound looking like a grave in the flickering light. It was, Cope though, an eerie scene. He could almost believe the Sioux legend.

← Merry Christmas! The Sisterhood of the Blade Anthology Released!
The Dark Tower: The Drawing of the Three Setera Silence Thoughts →