The Sharpest Object is a Mother’s Love: Review of Gillian Flynn’s Sharp Objects

Sharp Objects was another novel, like Bird Box, that I planned to tackle before I saw the television series. Dark Places was my first Gillian Flynn novel, and I loved the visceral descriptions there and expected something similar in Sharp Objects. 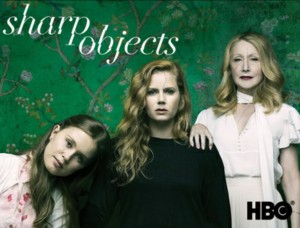 From my understanding, Sharp Objects is Flynn’s first novel and it shows. When held against the polished pieces of Gone Girl and Dark Places, you can see how her writing and imagery have evolved from the raw, somewhat malformed intent in the prose found in Sharp Objects. As if, Flynn had been building up to Gone Girl through the iterations of her previous novels. In Sharp Objects, the polish isn’t quite there. The images and actions don’t quite have that punch. There’s a bit of wobble to them, like puzzle pieces that just don’t quite fit. And I feel terrible saying that, because it’s not fair to compare stories with each other, but it is fair to acknowledge how an author has grown and matured as a writer. But no matter what, Sharp Objects has that Flynn style. From the opening page you know you’re in for an unhealthy, disturbing journey, a story full of meanness that can kick any slasher/vampire/serial killer/murder/psychological horror out of the park. I’ve never felt so unnerved reading anything before, and you can take that to the bank.

Sharp Objects gets a solid 3-stars from me. After all, this is Gillian Flynn, and her words shudder with an undercurrent of violence, from our protagonist Camille picking out a new sweater to her wandering the streets of her hometown Wind Gap, trying to find a murderer who strangles young girls and pulls out their teeth. The story is almost a study in place—the suffocating cyclical nature of small towns where your high school status follows you into your adult life, where drugs. sex, and alcohol run rampant as a solution to boredom, where one big blue-collar business keeps the town alive and kicking. Camille, a second-rate reporter, comes to Wind Gap on assignment to get the big scoop on the murders, hoping to use her intel of the town and its inhabitants to break the story first. She stays with her mother, Adora, and meets her half-sister, Amma, all the while having a romantic fling with the detective on the case. While she’s there, the past begins to resurface, making her face issues she thought she’d long since buried.

Camille is a really bad reporter. Like, she violates a ton of ethics and just doesn’t have that digging edge to get the story she needs. And she knows it. Her experience doesn’t really drive the story, instead, it’s the way she spirals from one moment to the next—drinking herself silly in the morning, having sloppy sex in the afternoon, and taking X with her half-sister in the evening. Oh, sure, she sets up interviews and chats with suspects, visits old friends to get their take on the murder, and cries to the only person she can trust—her editor—but Camille disintegrates as an adult in Wind Gap the longer she’s there. While that theme worked at times, sometimes I got the sense that Camille could’ve been a more impactful character that would’ve fit in more with the conversations crafted between the other characters—say, if she were a younger girl instead of a woman in her 30s. Then, it’d be more plausible as to why she’d follow her 13 year old half-sister into a house-party and take ecstasy and Oxy with a bunch of high schoolers and then drink a shit ton and meander home and oh, get a gut feeling that she’s figured out the murderer’s identity. I’m sure there are adults who do that, but it just felt so…uncomfortable to see a woman act that way. I didn’t buy it. I felt she couldn’t connect with the characters because she acted like an 18-year old, instead of the world-weary woman she was. There’s also a sense of intimacy found between characters that I’d never think could exist—Camille and her editor for one. If she was a younger woman and he her mentor, then yeah, I could see it. But the actions some of these characters did just seemed so strange.

Here’s a non-spoiler example: Camille goes to visit the best friend of her mother for an interview and the woman gets high on drugs, eats chocolate, and has Camille rub her feet while they talk. These women haven’t seen each other in years. And yet, she’s down to have Camille rub her feet? What??

Thank god for Richard Willis, detective extraordinaire, who, when it seemed like every character in Sharp Objects couldn’t do their job, actually had his shit together the whole time. I’ve never felt more relieved to sense the presence of an adult in a novel before.

But back to themes. As with Bird Box, bad mothers become a layer of horror to the tale, something that can be genetically passed from mother to daughter, something that infects all the relationships in Wind Gap. One scene in particular stands out—Camille forced to dress shop with Amma and Adora where Adora demands to see what Camille looks like in some kind of strappy dress that reveals that Camille is a cutter. Camille begs to stay behind the dressing room doors, but Adora forces her way in and is disgusted with what she sees. Camille bundles the dress into her mouth and screams. And, it’s a plausible scene like that that sticks: while not always so visceral, things like that have and can happen in real life.

It must be the reading theme of the month: how motherhood can be a horror of its own. Bird Box demonstrated it and Sharp Objects uses it to reveal how one bad mother creates another bad mother in a cycle that seems like it can’t be broken. How delicate the line between nurturing and suffocation can be, yet without love, be it twisted or not, the child yearns for some kind of affection or validation for the rest of their lives. I felt this could’ve been explored more deeply within the novel, but unfortunately, it got tacked on the end, much like the resolution to the book as a whole. An ending for sure, but not a satisfying one in the least. Things were wrapped up conclusively, but it came on too sudden, and felt like Camille rubbing the feet of a woman she hadn’t seen in years. Weird.

My suggestion? If you’re new to Gillian Flynn, read Sharp Objects first to get a taste of her style. Then, you’ll be able to appreciate her other works far more than if you double back. Or, just skip right to Gone Girl. Either way, you scare the shit out of me, Gillian Flynn. Write another book.

← Favorite Podcasts from Nightmare Magazine or These Ears Are Made For Listening and That’s Just What They’ll Do!
The New Fairy Tale Called The Fisherman →