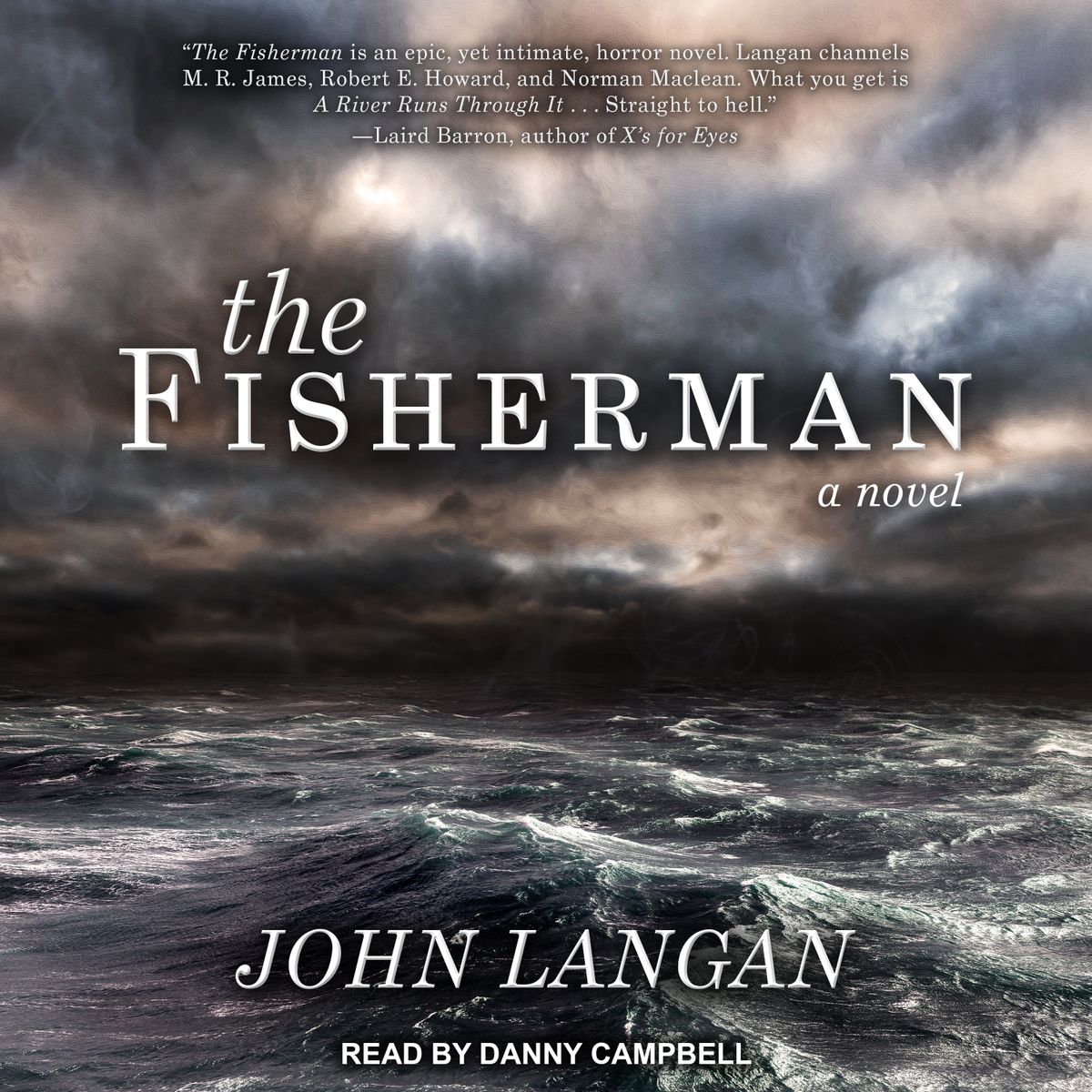 The tagline for John Langan’s cosmic horror novel, The Fisherman was “A River Runs Through It straight to Hell.” C’mon, as a Montana kid, how could I not read a book like that? I’m also catching up on a bunch of recommended horror novels from 2018, and yes, this one was on the list. That’s why it’s called a TBR pile. You get to it when you can.

Overall, I liked this book. I had a lot of complicated feelings about it when I read the last page. The writing was completely my style—that kind of literary prose that kept my mind engaged by vividly picturing every detail, almost like a memory. The book resonates with humanistic grief and the first section entitled “Men Without Women” sets up the tone perfectly. After all, horror can also be loss. Yet, this horror also felt somewhat detached, like a fairy tale, or more accurately, a fisherman’s tale.

Our protagonist, Abe, plays the part of a fisherman almost too well. His voice is the slow, detail-oriented speech of a grandfather, telling a story where you’re on the edge of your seat, asking him to speed up and get to the good stuff. But he won’t be rushed—the details mean something—and he’ll fill your hours explaining the routes to drive through the Catskills, the rivers waterways that mean nothing to a girl like me, how he lived through the rising success of IBM and his bitterness when the company betrayed by asked him to retire before he wanted to. Hell, he even explained how he lived his retirement up to Y2K and how he managed to survive.

Once, in a creative writing class—and this is relevant, I promise—a gal wrote a story and used references that those in the younger generation didn’t understand. Our professor applauded her, telling her that she didn’t need to explain her story to fit the masses. If they wanted to look up what she meant, that was the reader’s responsibility, not the writers. At the time, I totally agreed with him, but I’m beginning to waver on that point. It’s also a comment fueled by the information age—just Google it, and you’ll figure it out! Why should I take my time explaining it to you when you can do it on your own? We’ll, I’ll tell you right now I didn’t Google Maps the layout of the Catskills, or the history of IBM. I just kind of sighed in my chair, and mulled over whether it served the overall master plan to capture the true voice of a fisherman. I mean, the book is called The Fisherman. Who was I to complain when it felt just like an old guy reliving his horror days and hoping you’d stick with him until the end?

A fisherman’s tale is similar to a fairy tale: there’s a foe to defeat, the hope that luck is on your side, and the glory earned when you come home with a prize—of a monster fish or a princess. That tone wrapped around this horror story, and once I accepted that, a lot of other things made it easier to swallow. I didn’t get fully drawn into the story until the second act. Like a fairy tale, the story wasn’t all the protagonists alone. In some ways, he was just the vessel to tell the true story, an outsider who had accepted to a degree, the loss of his wife, who, like Virgil, took it upon himself to guide another grieving husband through the healing process.

The second act transported me back to the early years of the United States, and explored a melting post cast of characters who came together because of stone masonry jobs building a reservoir. Spooky occurrences began to happen—a dead woman with gold eyes haunting the town who’d been brought back from the dead. The supernatural seemed somewhat common place for the characters—after all, nothing could stop them from doing their stone mason job, not even a golden eyed creature hellbent on getting her live children. I read a good portion of this late at night while the winter wind howled outside, so when I had to use the ladies room at one in the morning, I sprinted from the bedroom to the bathroom, convinced I might see a soaked dead creature with golden eyes following me, catching me in the closet, and showing me the horrors that live within the cosmic ocean of the universe.

Of course, Rainer—our hero, father, and black magic wizard turned stone mason—came to the rescue with his otherworldly knowledge gained from the old world, doing a bunch of esoteric stuff to halt the bad forces. Like a fairy tale, a lot isn’t really explained, but I mean, that’s a fairy tale’s bread and butter. Characters just know how to do shit.

And now, into the spoilers.

The Fisherman, another grieving man without his woman, has gathered the magical tools to fish for the giant world snake that wraps around the world. It’s a culturally interchangeable fish, at some point being called Jormungand and then Apophsis. What the Fisherman hopes to gain from this, I can only surmise. Control over death? Power over the world? The powers of resurrection? ¯\_(ツ)_/¯

Yet somehow, Rainer has experienced this Fisherman myth, although we really don’t know why or how, but Langan enchants me with his vivid weave of prose that immediately struck my imagination like lighting, so I’m okay with not really knowing:

Has he woven the ropes?

From the hairs of ten thousand dead men.

He has forced the hooks?

From the swords of a hundred dead kings.

Rainer saves his daughter from the dead woman’s spell upon her soul, he stops the great world fish from being caught, and then goes back to his life as a stone mason and later water control manager. Only much later, when the mysterious forces from his past return, do we get inside his head to understand where his magical knowledge came from. What Langan describes is something I have dreamt about, a place I’ve been trying to write a story about for a long time, but haven’t had the words.

These are the cities built along the shores of the black ocean. This was one of them. It was neither the largest nor the oldest of these places, but it was of sufficient size and age for our instructors’ purposes. They had set us to a task—a kind of examination—to determine if Wilhelm and I were ready to proceed to the next state in our learning. Our mission was simple: we were to make our way to the other side of the city, where we would find its necropolis. There, we were to locate a certain grave, and pluck from it a flower we would find growing in its soil…Not only was the flower rare, it was regarded by the city’s populace as the soul of the priest who was buried under it. To remove such a plant was considered a mix of heresy and murder. The streets were full of police, tall shapes dressed in black cloaks and wearing masks fashioned to resemble the curved beaks of birds of prey; they were armed with long, curved knives..The geography of the city was strange, contradictory. Streets ended unexpectedly in blank walls, or climbed bridges which came to a stop high in the air…We had to guide ourselves by the stars burning overhead. These were not arranged in the familiar constellations. Here, the images they drew had been given names such as the Rider, the Staff, and the Garland of Fruit.

Are stories like Jormungand? Eating their own tail, simply reiterations of the same creative force that floats like an ocean over writers, artists, dreamers, and creators? Sometimes, I feel like we are all pulling from the same source, and the flavors are the only difference between them. Like any fairytale, I wanted more. I wanted to explore the city, I wanted to be in Rainer’s past like an ache, I wanted to make the real Fisherman tell me his story. I suppose this is what makes fairytales so accessible. How many renditions of Snow White grace the shelves? The Fisherman is a launching board for a variety of interpretations and other avenues of story that, I feel, are desperate to be told.

My final note ends on the idea of cosmic horror. I briefly read other reviews that tagged this as Lovecraftian, and I myself blundered into using that term very fluidly. Yet, I wouldn’t say this boils down to the Lovecraftian insanity induced by, say, Cthulhu, but it does have that type of cosmic god-like horror experienced by overwhelming environmental-inspired fears. I have an urge to settle on a different term for cosmic horror that doesn’t directly link to Lovecraft. Sublime fiction? Cosmic Sublimity? I’ll work on it and get back to you.