Richard Siken’s Crush may be an older book of contemporary poetry, but it’s one that continues to be close to the heart. Other reviews have described it as panicked and obsessive, which I agree with, but other things that aren’t covered as often encompasses the sense of desperation—resonating with a generation today to be careful for what you wish for. 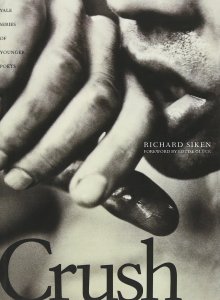 Crush is Ouroboros, a giant ancient snake of want, need, and desire, that, because of the shades of his passion, cannot find fulfillment or reciprocation. The only solution is to take, demand, and hurt, which further bloodies and mutilates the object of desire until it doesn’t resemble anything of its original beauty. The characters within Crush must devour their own hearts, consume their lover’s hearts, asking “Did he find that one last tender place to sink his teeth in? (41)” until wild promises are made and kept, rendering the protagonist into “your slaughterhouse, your killing floor, / your morgue and final resting (41).” Since things like love, hate, desire are ever-changing constructs, Crush embodies how you must own a piece of your obsession to keep them/it as they are—whether that be a bullet lodged in your heart, or a jacket you’ll always wear, or one side of the wishbone that you pull after you’ve both murdered a man. These act as some semblance of a living memento mori, or better yet just simple evidence that the characters can present and show to their lover after time as if to say, “What do you want, sweetheart? (62).” There is no better way to love than to devour—that taking the beloved into yourself is the only true way to show that love.

Throughout Crush, love and desire exist on a liminal plane, wavering between sex or violence. One kiss can land you in a passionate embrace, or drowning in a swimming pool. An obsession can land you existing in an abusive affair. After all, “kissing degenerates into biting (23).” But it’s water which soaks the pages of this collection, twisted from its traditional symbolism of cleansing and purifying. Out of the swimming pools and lakes rise “And a lady singing / Love on the water, love underwater, love, love and so on / Love always wakes the dragon and suddenly / flames everywhere (11).” Ouroboros arises, unfulfilled by the love it expects, love it’s told it deserves, and remains unsatisfied with what it’s given. Siken’s characters try to birth their desires, which remain stillborn or twisted: “You could drown in those eyes, I said, / so it’s summer, so it’s suicide, / so we’re helpless in sleep and struggling at the bottom of the pool (6).” In the privacy of the shower, you can imagine the things that make you feel dirty, “wearing your clothes or standing in the shower for an hour, / pretending that this skin is your skin, these hands your hands (4).” Water doesn’t purify or baptize. It drowns.

One thing I’m not portraying well in this review is Siken’s structure. The line placement feels like gasping breaths, heavy moments, or intimate pauses found in conversation where you’re choking on your words. It’s a secondary piece that makes this work so gut-wrenching. Beyond the brutal prose, the spaces feel like the character is finding courage to spill his soul, just waiting for the judgement he might receive, and cutting down expectations early by cutting in:

“And the part where I push you

Criticism may be difficult to come by within this collection, but at times some of the imagery can be too close to Siken, as if it only represents a feeling or experience that is wholly his, one that readers cannot partake in. List of objects paint a scene, yes, but they also generate confusion regarding their significance. In that way, Siken keeps pieces of his work incredibly private, like an inside joke, that the reader can only guess to its meaning. But that might be part of the joy of the work—getting to know the poet in a way only a lover could.